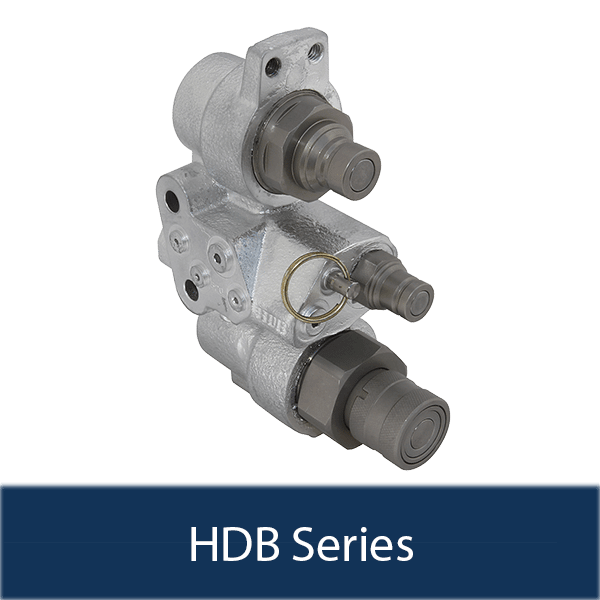 Operator safety and failing hydraulic systems have led to a new decompression block coupler from Holmbury, the HDB, which is designed for the quick change of hydraulic attachments for skid steer, compact and backhoe loaders—as well as compact utility vehicles. The decompression feature allows the operator to alleviate trapped pressure allowing for quick and easy connection of various attachments.

Holmbury will launch the coupler at ICUEE in Louisville next month. It is rated for maximum operating pressures of 350 bar and temperatures ranging from –25° to 100° C. It offers flow rates of 86 lpm at 2 bar ∆P and decompression force of 130 Nm at 275 bar trapped pressure.

Holmbury developed the HDB when a major skid steer manufacturer was searching for a way to resolve a problem with its high-flow grapple attachment application. Mulder said the skid steer was using a competitor’s block coupler (4BD4FH series), which decompresses by pushing on the coupling. Due to the high-flow requirement, the rigidity of the hydraulic hose and the action of the grapple attachment, that block coupler decompression circuit was opening inadvertently, causing the hydraulic system to fail and ultimately creating an operator safety issue.

With the new HDB, the decompression valve cannot be inadvertently actuated during system operation. And it only takes only a few seconds to make the change, whereas the traditional way to decompress a skid steer loader system can take several minutes or longer due to the various steps required to relieve trapped pressure within the machine side.

Mulder said that the mounting pattern is a direct interchange with Faster’s 4BD4FH and Stucchi’s Saturn block coupler series, which is installed on the end of the boom arm on the skid steer loader. He added that Faster is the leader in the market, and until recently, was the only hydraulic quick coupling manufacturer to offer a connect-under-pressure block coupler. The decompression function of the Holmbury HDB is different in that there is an external valve stem (push or pull) that when actuated, opens the machine hydraulic circuit back to tank. This immediately takes trapped system pressure to 0 psi.

All couplers are flat face and are designed to the 16028 Standard. Their low profile coupling design minimizes failures due to side-loading issues. They can be ordered in coupler arrangements of ½ in. for standard flow or ¾ in. for high flow applications. The case drain coupler is a standard 3⁄8 in.

Finally, because the couplers allow for easy in-field replacement, they offer easy access for servicing of internal components and low cost.