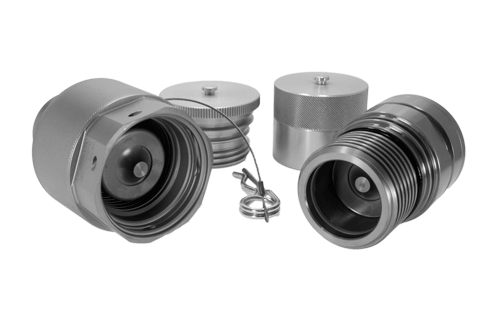 This article has been featured in the April edition of hydraulics and pneumatics magazine. It focuses on our partnership with Komatsu and how we overcome an industry problem by working together.

When Komatsu UK approached Holmbury in 2007 it was clear there was an opportunity for both companies to work towards a common goal of improving the efficiency of changing hydraulic attachments on Komatsu’s large excavators. Holmbury comments that it has always sought to work collaboratively with its business partners as shown by longstanding relationships with a variety of construction equipment manufacturers. Holmbury recognised that the opportunity to work together with one of the world’s largest construction OEMs was one not to be missed.

Komatsu’s reputation for quality and reliability meant it demanded testing to a very rigorous standard; incorporating high levels of vibration, pressure impulse and temperature simultaneously during the testing and approval process.

Holmbury was established in 1982 by David French and quickly became recognised for its high quality, reliable products. The company is best-known for its innovative flat face coupling design, launched in 1984, which soon became a preferred quick release coupling solution for heavy construction equipment OEMs. The flat face design prevents the inclusion of air and contaminants, while preventing fluid loss during disconnection.

Critical component Furthermore, the design also helped shape the ISO 16028 Standard. Quick release couplings have now become a critical component of hydraulic circuits, especially where attachments are changed regularly. Since then Holmbury has greatly expanded its product range to include many hydraulic component designs, tailored for specific applications and environments.

The request from Komatsu was to develop a coupling that could withstand the extreme conditions of severe vibrations and high pressure pulses produced by its large excavators. The Komatsu UK produced machines are in the range between 20 and 80 tonnes, traditionally utilising solid pipes or valves to accommodate the high flow rates passing through the sizeable hydraulic lines.

Komatsu had already realised that switching to quick release couplings presented the opportunity to reduce attachment changeover times to a couple of minutes, significantly faster than with solid pipes or valves, reducing costs associated with machine downtime and labour.

After initial discussions with Komatsu, it was evident that there was no existing quick release coupling solution in the hydraulic industry that met the demanding criteria set by Komatsu. The Holmbury design team worked closely with the design and purchasing engineers from Komatsu, establishing a clear development schedule that thoroughly explored all options for the coupling design. Over the course of numerous meetings and collaborative workshops, the design began to take shape and in 2009 the PS Series was born.

The PS Series utilises a screw thread connection, eliminating the Brinelling effect commonly seen on push connection couplings. Brinelling occurs where locking balls cause indentation damage and create structural weakness over time. The male and female halves are locked into place using a retaining clip, preventing accidental disconnection. Once fully connected, all internal components are held rigid which significantly reduces the risk of material fatigue. Finally, Viton and HNBR seals are fitted, which are shielded to minimise wear.

Once the design phase had been completed the coupling was put through a rigorous testing period, at an independent laboratory, where it exceeded 3 million impulse cycles while being subjected to heavy vibration in the horizontal and vertical planes. Testing showcased the many strengths of this coupling. Beyond the time savings on machinery changeover, minimal oil loss occurs on disconnection, due to the double shut-off action. In addition, the coupling experiences low pressure drop and can accommodate flow rates up to 1000 l/min. Furthermore, the coupling can be connected and disconnected with up to 50 bar residual pressure in either or both, the hydraulic lines.

Award recognition The PS series has been received extremely positively and has helped Komatsu machines to become highly successful in the construction industry. To emphasise this success, this month (April) saw Komatsu’s PC490-10 HRD (high-reach demolition) excavator winning the ‘Industry Service Provider Award’ at the National Federation of Demolition Contractors Awards 2015 for ‘Innovation of the Year’.

The PS Series is now available to the general market and offers a tempting alternative to traditional options for large excavators and demolition equipment. The extra heavy duty screw coupling is one of many innovations which Holmbury has in its product range and Holmbury continues to explore new opportunities across the hydraulics industry.

Martin Vanns, managing director of Holmbury Ltd., added: “The PS Series is a product that Holmbury are enormously proud of. It reinforces our drive for growth in new products and markets. Holmbury always welcomes the opportunity to partner with OEMs, working together to solve complex problems with simple solutions.”